Experience the Val Venosta in South Tyrol on a road bike 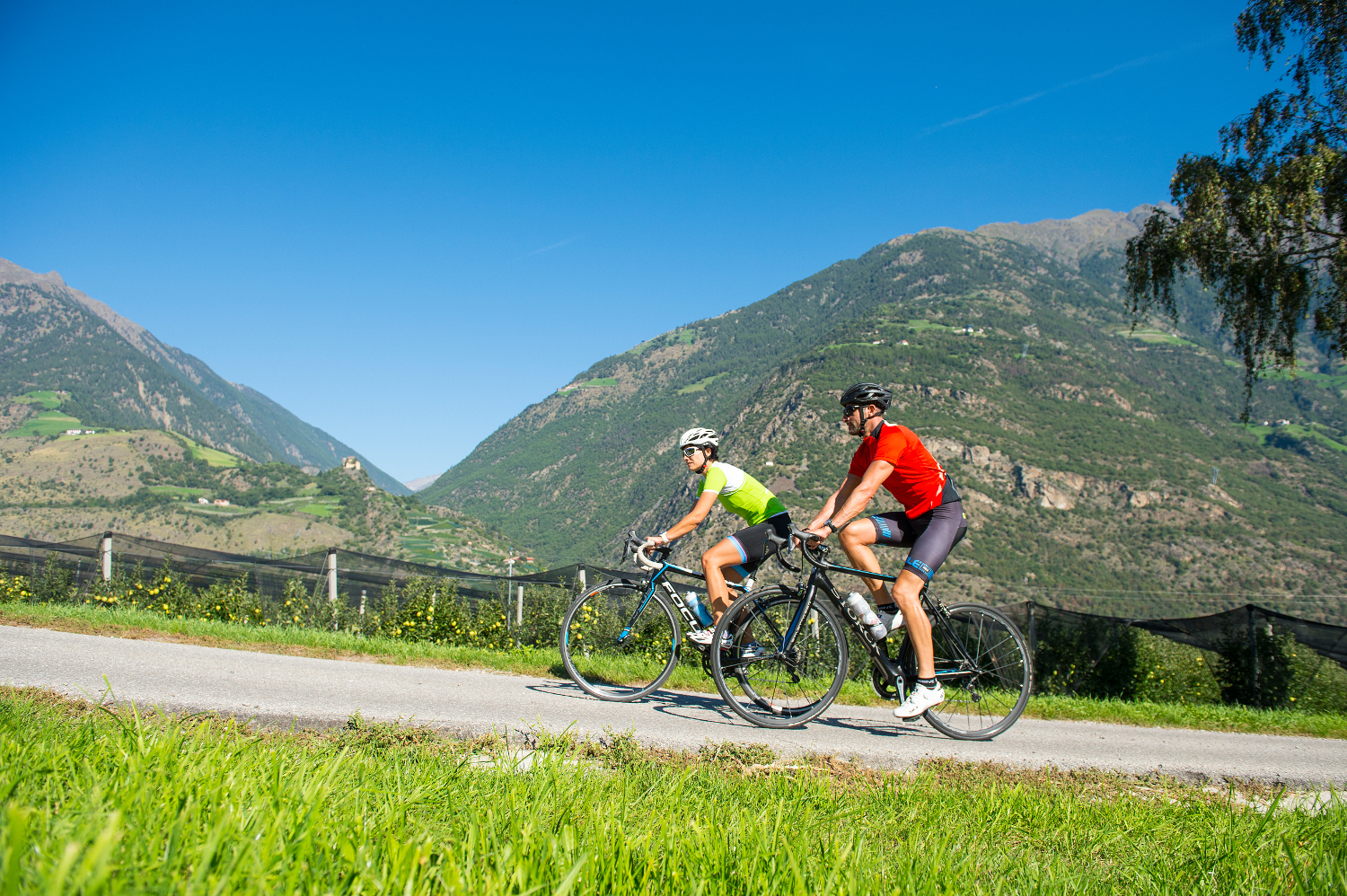 Hardly any other region in South Tyrol reaches this figure. 315 sunny days a year is enough to make every cyclist happy in Val Venosta. The season for road bikes runs from February to November. The major passes are usually snow-covered until May or from the end of October, but the valley and mountain slopes around Naturno already experience temperatures just below 20 °C for road bike tours in March.

The first tour of the season: cycling along the Val d’Adige cycle path from Val Venosta to the Merano valley basin during apple blossom time. The white sea of petals in the apple orchards is a magical time you will treasure forever. In addition to the major passes, we can recommend the numerous small roads on the mountain slopes over the farms of the mountain farmers. The valley is about 80 km long and is one of the most beautiful spots in South Tyrol. 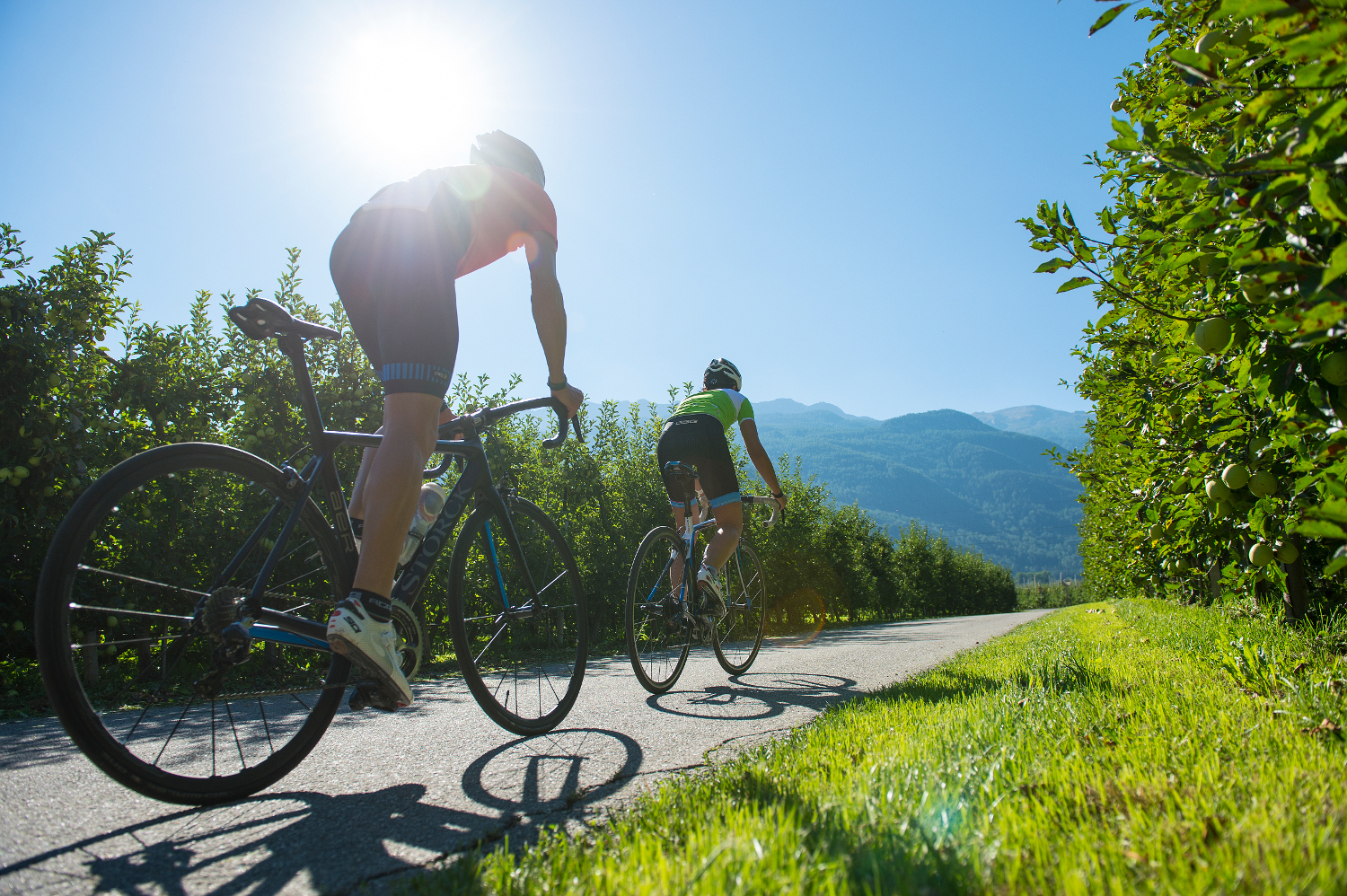 Road bike tours and passes go hand in hand like mountain bikes and trails. THE tour in Val Venosta is the Passo dello Stelvio from Prato. Only a few passes in South Tyrol are as popular with the biking crowd. Once in your life, you must have experienced standing at the top with your road bike. 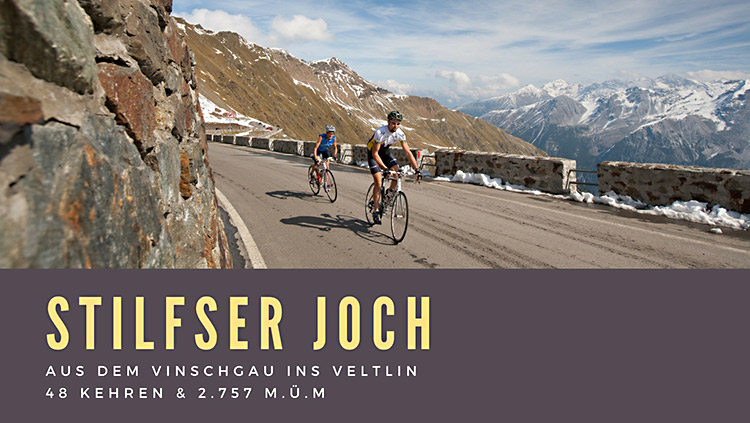 At the top means 2,757 m after 48 hairpin bends in front of the Ortles. The popularity of this tour is self-explanatory from bend 31. The panorama makes you almost reverential. Whether you start in Naturno and cycle up the valley to the Passo dello Stelvio (more kilometres and metres in altitude) or in Prato is up to you.

The Passo del Rombo is located at the end of the Val Passiria, exactly opposite so to speak. It has been the crossing point between Austria and South Tyrol since 1919. At 2,474 metres, it is not quite as high as the Passo dello Stelvio. But thanks to the Gruppo di Tessa, the Ötztal Alps and the Stubai Alps, the mountain pass road is by no means less beautifully embedded in the landscape.
Every year after the winter break, which usually lasts from October to June, racing cyclists eagerly await the opening. They also wistfully hope for a starting number for the draw for the biggest road bike event in the Alps: the Ötztal Cycle Marathon. To be one of the more than 4,000 participants is considered a stroke of luck.

Panorama tour: By road bike from Prato over the Passo dello Stelvio

Altogether 7 passes can be mastered in and around Val Venosta on a road bike tour. All are accessible from Naturno. Just about manageable in one holiday.

Of course, the infrastructure is also right. Whether a road bike hotel or road bike hire – the Ötzi Bike Academy offers a comprehensive service for cyclists.

The first people already head along the Val d’Adige cycle path, the Via Claudia Augusta, in February. 80 km of cycle paths draw you from Lago di Resia in the upper Val Venosta to Merano through the small villages in the valley. It is quite an experience, especially in springtime when the thermometer in the valley is already well above 20 °C, yet the peaks are still covered in snow. The cycle path shows South Tyrol from its most beautiful side.

Anyone who want a few meters of altitude or likes it more extreme should climb the Monte Sole in the middle Val Venosta. There are two reasons why the tours through the mountain slopes are so memorable in the summer – the unique panorama of the valley and Sardinia-like temperatures due to the southern exposure of the mountain. Those who don’t consider Merano is far enough, can extend their tour to Bolzano. 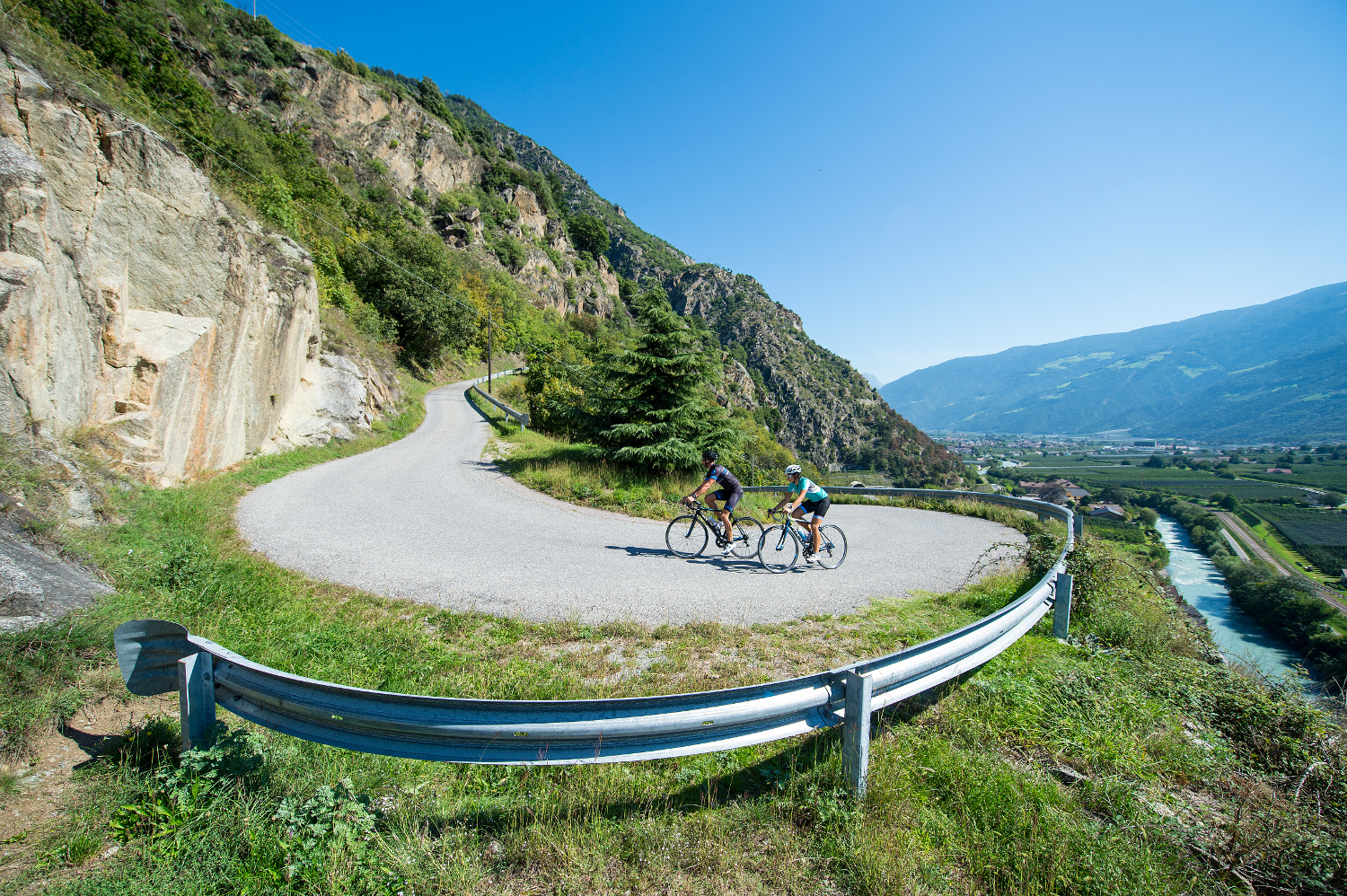 We also recommend tours to Val Senales or Val Martello in Val Venosta or to the Val d’Ultimo and Val Passiria. The road bike scene knows the Val Martello as a stage finish from Ponte di Legno  to Val Martello during Giro d’Italia.

However, most road bike tours take you over Merano. From there, there is more to reach than just the respective valley entrances to the passes. For road bikes, the Monzoccolo near Merano via Scena is extremely attractive. This tour takes you along magnificent mountain roads through remote villages on the plateau to Bolzano and in the valley along the Val d’Adige cycle path back to Merano or Val Venosta. By the way, this is also where you meet most of the locals at their training.

You can’t really miss it. The Monzoccolo mountain stretches south-east of Merano at an altitude between 1,100 and 1,500 metres to Bolzano. It doesn’t have a distinctive mountain ridge nor the usual height above the 2,000 mark, so it’s more of an insider’s tip for a road bike tour in the region. The views along the way open up to the Val Venosta entrance and the Merano basin. The locals also greatly appreciate the peaceful nature of the plateau between Avelengo, Verano, Meltina and San Genesio for their road bike tour training. If you ask them for a tip for a quiet tour away from the passes, the Monzoccolo is bound to come up.

You can reach it by road bike from Naturno via Merano and Scena heading towards Avelengo. During the ascent, the traffic already decreases noticeably in comparison with the roads around Merano. Merano is the central tourist magnet in South Tyrol. If you prefer a longer tour on the mountain ridge, you can either go to Terlano or somewhat longer over San Genesio just before Bolzano. Depending on your stamina, you can choose to descend on one of the small mountain roads. You can return to Naturno in Val Venosta along the Val d’Adige cycle path via Merano.

View all the road bike tours in Val Venosta at a glance in our online GPS Road Bike Tour Planner.

7) Sellaronda: Detour with the road bike from Val Venosta in the Dolomites

For racing cyclists, the Dolomites are superlatives in themselves. Beautiful scenery paired with spectacular passes, you just have to have been there. One of the best tours in South Tyrol is the Sellaronda.

The Sella massif lies on the border between South Tyrol and Trentino. The tour takes a circular route over the Passo Sella, the Passo Pordoi, the Passo di Campolongo and the Passo di Gardena. 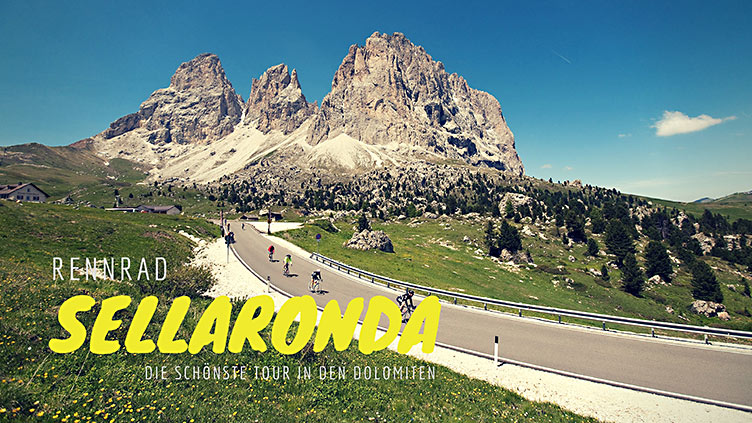 Start on the road bike from Val Venosta, this tour is only for crack cyclists as it’s considerably more than 200 km. Ötzi Bike also has a guided tour of the Sellaronda in its programme, so that you can still ride it during your Val Venosta holiday.

Of course, we also offer a shuttle service from Naturno for cyclists who want to combine a Sella tour over the pass with a detour to Val di Fassa or Val di Fiemme and avoid the long return journey back to Val Venosta. 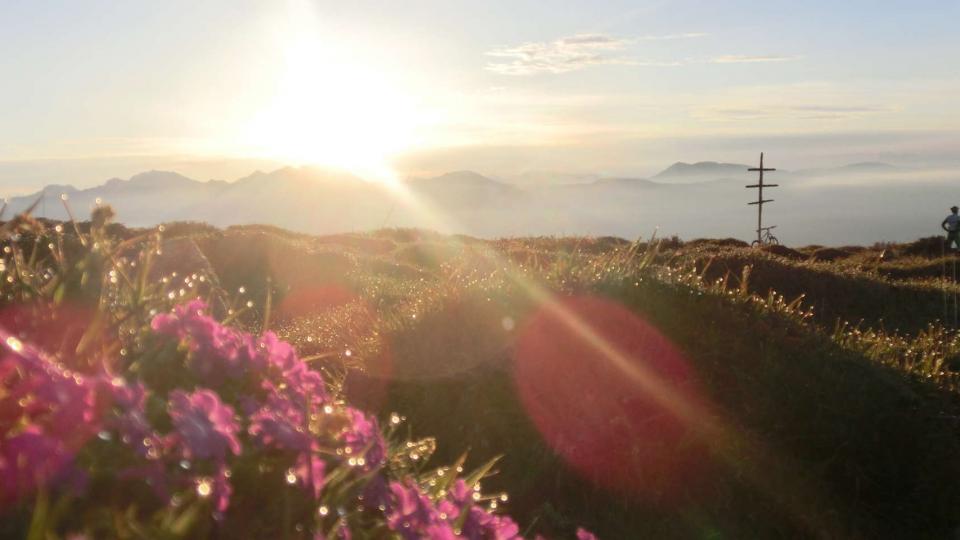 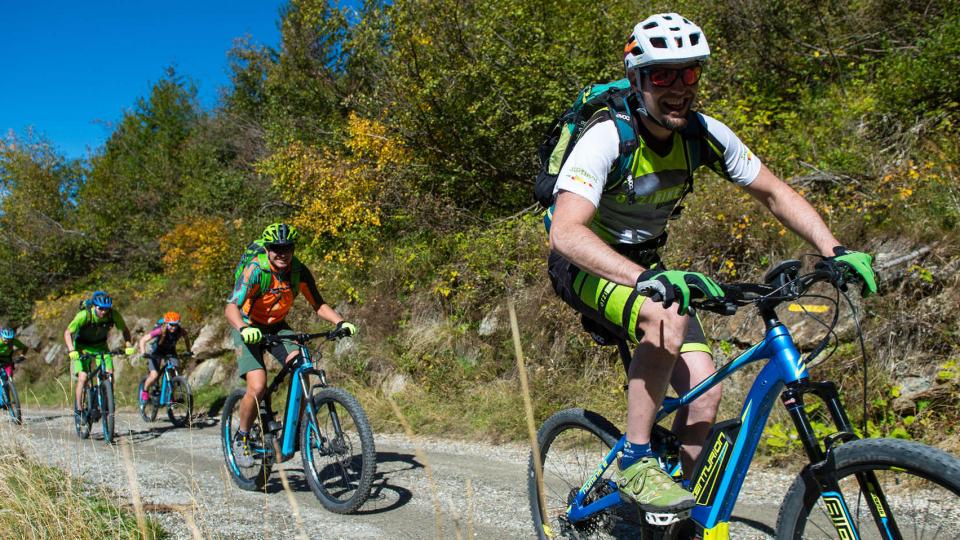